The Crazy Chef's quick fix for Shawarma! When you don't have all the ingredients, but still want to have something Shawarma-ish! ;) 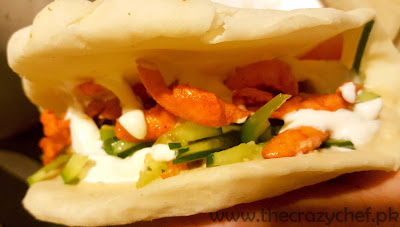 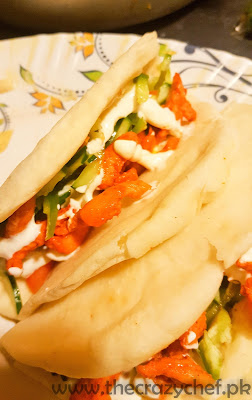 Marinate chicken strips in tikka masala and lemon juice for fifteen minutes, then fry and keep aside. Make faux hummus (as I like to call it!) by putting boiled chickpeas in blender, a pinch or salt and pepper. Now turn the machine on and blend it, slowly adding olive oil. Switch it off once the boiled chickpeas turn into a smooth paste.
Now simply assemble the wraps: Slightly toast the pita bread, spread some hummus, put in the chicken and veggies, top with delicious thick and tasty Olper's cream and fold it in a wrap! The cream gives you super creamy texture combined with hummus. Voila! Its ready! Enjoy your faux shawarma wrap! :)