This bakra eid, my parents had gone for Hajj, leaving me behind. So naturally, the duty to wash, cut, trim the meat fell on my weak little shoulders. The morning which I was dreading, finally came. And my brother started bringing in the meat, filling up the kitchen table. So much meat! But this was the moment, where I had to fight back the feeling you get when you see too much raw meat - and blood. 'Brace yourself!', I said to myself. I then changed my clothes, rolled up my sleeves and got working. First cut I got hold of was the neck of the goat. Not much fat, just a bit here and there and easier to clean. Then I chopped up the liver and the kidneys, putting them straight in the marinade I had prepared for it, to be later bar-b-qued. Then came a huge leg of mutton, with a bit of fat. Also, washed it then marinated and it's now in the freezer. I made my own spice mixes (you can make them your self too, click here). After the mutton, next up was Beef, which really wasn't much of a hassle and was gotten over quick. The most interesting and challenging meat to wash and trim was the Camel's meat. It had, THREE layers of fat, out of which two were not edible and had to be removed. One was transparent, and of a very gooey texture. The second layer was a little pinkish, with a very slippery touch and the third layer was edible, and also, which didn't have to be removed. So, since making faces at it didn't help, I took out my cleaver, two chef's knife and one carving knife. All of which played important role in the cleaning of the meat. First, the piece of meat had to be chopped smaller, for which I used the cleaver; to remove the fat, first it had to be scored with a sharp chef's knife and then later removed by a carving knife - and hence my struggle began! The thin layer of fat kept slipping from my hand and it became absolutely impossible to peel or tear away that layer of fat! First because it was transparent and second I kept losing it's grip! I tried nonetheless, held it in my fingers, wrapped it around and got to it. Eekh. Just don't ask me how I felt and how I did it. I was trying hard not to feel nauseous. It took me 25 minutes to trim a 400 gm piece of meat, off fat. It was one tough task. Finally, got done with the meat in almost two hours! For me, this was more of a fighting-my-self-and-gathering-the-courage-to handle meat. The feeling of being successful, is just awesome (though, I've promised myself never to touch camel meat again, EVER!) 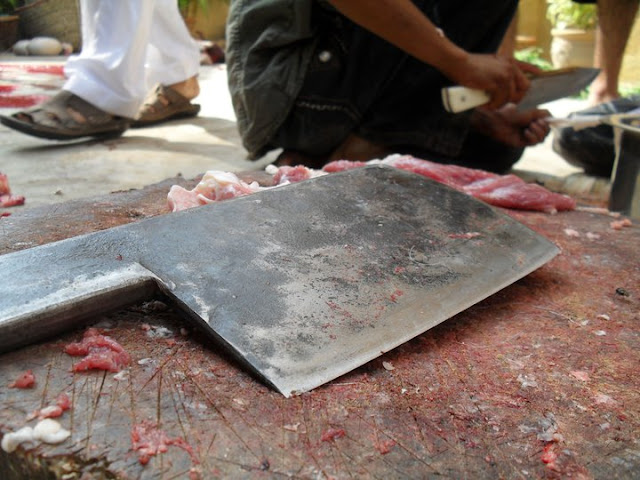 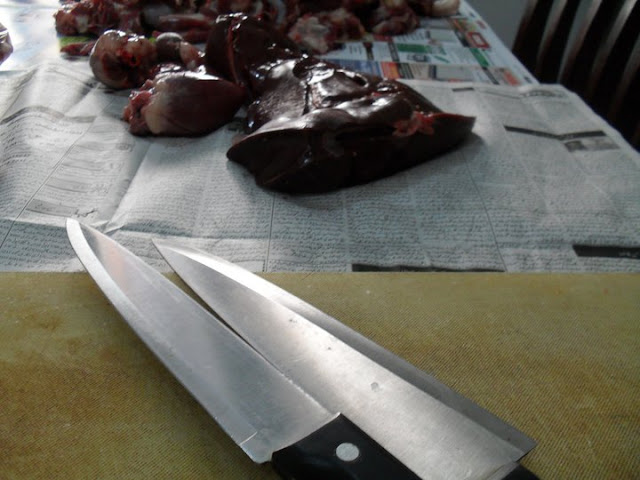 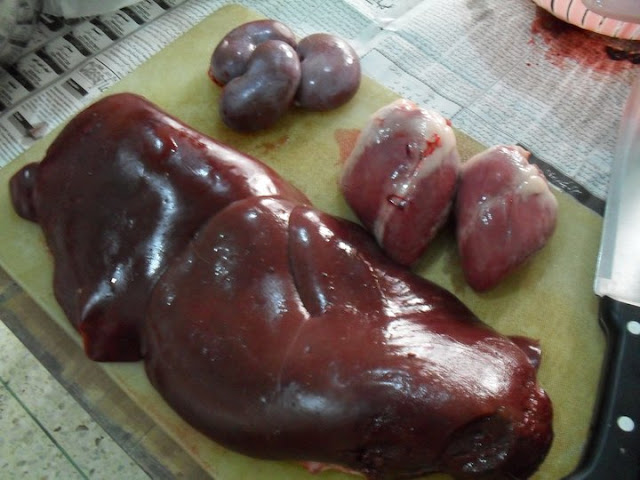